Is the China Gold Rush Ending? 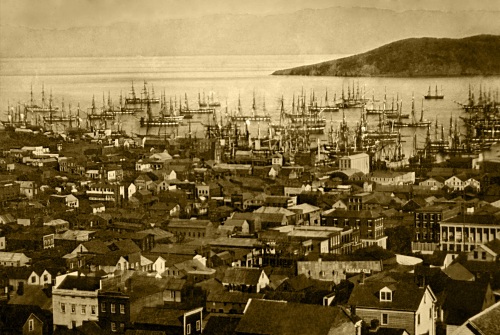 In 1849, a rancher named John Sutter sent men to the American River to build a saw mill. Instead, they found gold, starting a rush that brought over 300,000 ‘49ers from across the world to eventually prospect another $12 billion in gold from surrounding hills. The discovery created an enormous expansion in America’s money supply, some by the very gold found in nearby streams. However, much more money was created by debt instruments that funded the Gold Rush. Banks funded the passage of thousands prospectors to buy passage to California, to purchase goods to pan for gold, and later to fund companies that organized for that purpose. By 1850, banks from St. Louis, Boston, New York, London and Paris spurred the growth that created the State of California.

The growth of population in California and Oregon fueled railroad expansion to the West. The completion of the Transpacific Railroad in 1869 started a great railroad speculation, funded both by American banks and European investors. In four short years, investment of track doubled to 35,000 miles. America’s investment in rail and encouragement of immigration spurred a revolution of competitive wheat production and American export of low priced wheat to Europe. Europe now found that the capital it had supplied to build America’s railroads, gathered from its previous decade of speculative housing construction, was the very capital that fueled its demise into a depression which lasted from 1871 through 1893.

With the shortfall of hoped for European funding, American banks became overextended as speculation continued unabated. Jay Cooke and Company, the Goldman Sachs of the time that had funded the North during the Civil War and that had funded the successful Transpacific Railroad, tried and failed to corner the gold market to fund its investment in the Northern Pacific Railroad. Instead, it was forced to file bankruptcy in 1873, triggering America’s Long Depression, collapsing major banks, bankrupting 89 of 364 railroad companies, and an additional 18,000 businesses. The extreme speculation and overbuilding in the one industry of railroads triggered a great depression. This massive over speculation was not seen again until the even greater housing industry speculation in America that ended in 2008.

Similar to California, China has become the land of gold rush for EurAmericans. In 1978, China embraced its four modernizations and opened its doors to the West, creating a gold field of capitalist opportunity. Gradually at first and then in a frenzy, tens of thousands of businesses rushed into China, over ten thousand U.S. businesses in the last decade alone. Similarly to America’s gold rush, U.S. and international banking interests made a fortune supplying MNCs with the capital required for their prospecting.

To feed this frenzied opportunity, American banking interests tapped into the immense financial wherewithal of the American people. Through a Great Ponzi Trifecta, banks accumulated debt derived capital from the Savings and Loan Ponzi, the Dot.Com Ponzi, and finally the greatest Ponzi ever known, the EurAmerican housing bubble. Hordes of EurAmericans were convinced to leverage their future earning ability to create debt that could be flipped through derivatives to fund China’s gold rush.

A dollar multiplicative frenzy sped much of America’s future wealth creating potential into China prior to the Ponzi’s ultimate collapse. As housing prices, and subsequently commercial real estate prices, soared beyond the ability of the American economy to cover the underlying debt, the purveyors of this debt mountain continued to assure investors that a new economy had emerged that supported such imbalances. Yet American wages did not keep up with the rise in housing and counterbalancing forces such as a lost industrial base and historic government deficits finally stripped the Ponzi of its legs, and America’s Great Middle Class funding of China’s gold rush subsided.

Just as Europe lost its wherewithal to fund America’s railroads after America undercut European commodity prices in the 1860’s, America lost its ability to fund China’s growth as MNCs gave China the ability to undercut American industry. However, unlike 1873, America’s Federal Reserve softened the impact of international banking excesses, mitigating the collapse of Bear Stearns, protecting the securitization of AIG, and supporting world banks through massive expansion of its money supply. However, the implosion of the securitization market left China with a weakened EurAmerican engine of direct foreign investment.

June, 2011, marks the supposed end of debt driven EurAmerican speculation helping to fuel China’s growth with the pre-announced ending of Quantitative Easing. If Bernanke follows through on his promise, America’s money supply will begin to contract similarly to America’s contractionary policy following the Civil War leading up to our Long Depression of 1873. Our Congress is also debating contracting governmental spending simultaneous to the Feds potential contraction of money.

Recent reports may have quietly forebode America’s double dip recession with the downward reversal of home prices and downward reversal of job creation. Has China enough momentum to continue its meteoric expansion without historical capital infusion from the West and with a contracting EurAmerican market for its goods? Or, will China face the disruptive consequences of the world’s most recent speculative bubble?