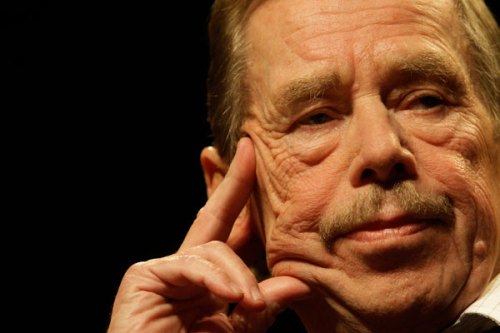 http://www.humanity.org/voices/commencements/speeches/index.php?page=havel_at_harvard
.
The problem with the premise of Vaclav Havel’s speech stating that we have essentially reached a single global society is that he contradicts himself throughout as if to say that it is merely his hope for future global achievement. I do not see evidence that mankind is evolving toward his ideal. Havel idealists can point to certain social structures and advances in the precedence of laws to suggest that we are progressing as a species. For instance as of 1981, all nations on earth have passed laws against slavery. And yet, others would point out that the earth contains more slaves in 2011 than at any other time in the recorded history of mankind.

We can point to the relative peace that has been achieved since WWII but this peace is not without precedence and has been at the extraordinary cost of the United States as hegemonist spending more than all other nations combined on military assets and personnel and creating technologies that could destroy the world many times over. And yet, with all this extraordinary expense of national will power, the number of battles has not decreased nor has the atrocities committed by nations or men.

We can point to the evolution toward democracy intertwined with capitalism as a trend away from the captive ideas of feudalism and mercantilism, yet where on Earth does true democracy exist? Globalism has reversed any trend toward economic and social freedoms envisioned by those that espoused the virtues of free enterprise of capitalism back toward even larger geographies of quasi-feudalism and mercantilism.

The nature of man is unfortunately not evolving at any measurable pace. The capacity of all is toward evil although 99 percent seek our better natures. The 1 percent who are ruled by their own sociopathic desires find positions of power when opportunities arise with which to pursue societal evil played one nation upon the other. The tools with which to accomplish this evil are unfortunately far outpacing mankind’s social progress.

To protect ourselves from those evil doers who have successfully harnessed other nations or societies, our societies have evolved to nation states and even larger civilizations of shared histories, shared cultures, and shared socioeconomic futures. However, because of the nature of mankind, we are far from evolving to a society that encompasses the entire world.

So mankind must cautiously move forward accepting as best we can winning compromises that allow others to win as well. Cautiously because we do not know if like all other bubbles of this period, that relative peace and cooperation are a bubble as well.