Either Trump or Sanders Will Win the Presidency

For decades, Americans have grown increasingly frustrated by what seems either as incompetence or as ideological stubbornness by both Presidents and Congress. After years of being ignored about lost jobs and lower pay, voter anger has peaked.  Americans have finally risen up to elect either Trump or Sanders as President.

We see both men as incorruptible supporters of the 99%.   Both have stood against international trade deals to bring back good paying jobs to America. Both have touted severe prescriptions to help America. Trump supports reversing illegal immigration to open more jobs for Americans.   He’s offered a deep tax cut for billionaires to avoid a political war within the GOP, although to no avail.  Sanders instead has declared a political revolution, vowing to fix America’s corrupt voting process, and to institute major transfers of wealth from America’s billionaires to the underclasses.

Shocked by America’s uprising, establishment politicians of both the Republican and Democrat parties have declared all out war to defeat Trump and Sanders. Party leaders have touted multiple reasons why they want to destroy them. But to be clear, the unspoken, REAL reason for such a blatant power grab is that America’s billionaires want their politicians to keep international trade deals in place, and to not give an inch of political power back to the middle class.

America’s billionaires profited trillions of dollars from military expansion that eased the transfer of America’s factories to other countries, and from trade deals that allowed bringing cheap goods back into the United States, both displacing American workers. Even if they may have their own candidate preferences, America’s billionaires will support any politician that continues to support their “free trade” money system.  Some GOP leaders have even blatantly stated that they will support Clinton over Trump, exposing billionaire objectives.

GOP and Democrat politicians will continue supporting their billionaire campaign contributors in order to maintain their jobs, parties, power and wealth.  They, therefore, will do everything they must to defeat Trump and Sanders.

2016 has been a naked display of anti-democratic thuggery by party establishments to stop voter insurrection.  But Trump and Sanders are fighting back, David against Goliath.  Trump is beating the drums of democracy against his own GOP as he continues to win a plurality of delegates.  Bernie Sanders is accusing Hillary of being paid off by her billionaires, and continues his winning streak in the traditional Democrat states, proving him to be the clear, best choice for his party.  As both parties and insurgents push forward, this revolution may not end without violent political upheaval.

Most Americans know that either Trump or Sanders must be elected to stop decades of billionaire abusive profiteering and trampling of the middle class.  So a coming voter backlash is building to a fever pitch.  I personally believe Trump’s policies are best to move America forward.  But if either he or Bernie is defeated for their party’s nomination, they must still go forward as independents to represent the will of the American people. Then, America will make its last stand as the House of Representatives, a body meant to represent the people, votes in the new President.  The Constitution will hold firm. 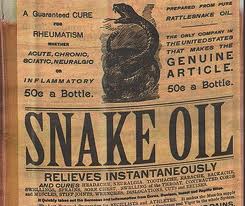 Within hours of S&P’s downgrading of America’s credit rating, some in American media cried foul of the Tea Party’s extortionist politics, claiming that the S&P downgraded America’s credit rating because of the Tea Party’s resorting to political brinkmanship. Unfortunately, this media spin was an example of the very reason we have brinkmanship in America. Suggesting that the Tea Party (to which I am in no way affiliated) is at fault for bringing down America is simply an example of the media buffoonery that makes up the forth branch of America’s dysfunctional political system. Pointing to a symptom of a political disease and calling it the disease is the same bit of quackery that allowed 19th century snake oil salesmen to roam our great country passing bottles of sugar flavored alcohol off as medicinal solutions to fix all ails.

For 80 years, America’s two party dynamics have allowed a continued trend toward gerrymandering and toward a concentration of extremist views that support a minority of Americans’ concentrated elitist power base. When the American two party system was allowed to drift from its origins as a representative body that earnestly searched for incremental compromise within the bounds of the great middle of America toward its current dysfunctional politicking of purveyors of polarizing opposition, America slowly denigrated into the acceptance of long-lived, unsettled, demoralizing, and financially degrading systemic problems as the norm.

The Great Middle was bamboozled into believing that these issues were fully outside the realm of achievable compromise. They were unaware that the two party system aligned as one regarding issues such as globalization, issues that were best left in a state of disrepair if they were to support the economic needs of the party elites. The Great Middle of Americans have known that our two party system has been up to no good for quite some time. Especially in the last two decades, Americans have consistently registered our complaint that Congress is dysfunctional, with disapproval of their performance over 80 percent. But the cloud cover that our fourth branch has provided through smoke and mirror journalism for the elites, their owners, has kept us from putting our finger on the problem.

Many are disillusioned by our two party system, but few have registered their support for third parties, instead continuing to hope for a different outcome each time they cast votes for the extremist representation we continue to receive. 2008 was a milestone shift of extremism. 2010 knee jerked in another direction as America’s debt rose as a critical issue. Debt is one of the issues that we have accepted as the dysfunctional norm for a long time. The Tea Party was not wrong to want to stand against this glaring elitist stagnation.

However, the Congress’s methods have become ingrained through trillions of dollars of political commerce that is obstinately resistant to change. S&P was correct in identifying brinkmanship not as the problem of American politics but as a symptom of our much greater dysfunctionality. This systemic problem of American politics has no easy fix within the timeframe that it would take for S&P to conscientiously keep our credit rating at AAA.

Unfortunately, it will take a bit of a revolution to change Washington. The Tea Party, and its counter constituents in the social democratized branch of the Democratic party, are the nascent beginnings of that movement. Yes, the young movement has mistakenly allowed itself to be influenced by the same powerful elite that has controlled the mainstream parties into thinking that low taxes for the elite helps America and that unfettered capitalism is good for us as well. Yet, as the Great Middle grows legs and stamina to compete in this indoctrinated political structure, it will rise up to meet the issues that have long since been the accepted norm.

Unfortunately for our economy, the spectacle we witnessed over the debt ceiling uncovered the tentacles that our elites have in holding onto the status quo in spite of what has been obvious to the entire world as a blatant need for America’s reversal of direction. We will all suffer financially as a result. Fortunately, however, for the future of our nation, this nascent band of revolutionaries that boarded the mercantilist ships of our elitist power base in Washington and threw overboard the crates of business as usual were able to withstand the fires of redcoat opposition.

They held up to the elite and drove a stake into the ground for change, real change, that has to have shaken the foundations of all in Washington and that signaled a sustainable and real chance at recovery. Through the power of the Constitution of the United States, the movement has signaled to the two party system, one that has long corralled the Great Middle into accepting a slow walk into the mediocrity of a diminished future, that a bit of a revolution has occurred.