Disability Has Decreased Our Unemployment from 10.2% to 7.5%! 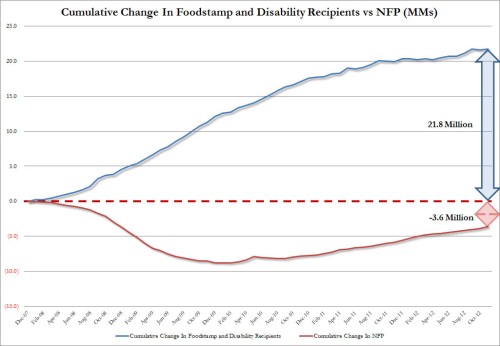 Unemployment exploded from 4.7% in 2007 to a high of 10.2% in 2009 before falling to 7.5% this month. Our government would have us believe that America is slowly on its way to fixing its joblessness problem. Yet, between 2009 and now, the percentage of Americans working has actually dropped from 59.8% to 58.5%!

Down from 63.7% before the economic implosion, 58.5% is the real number the government is touting as job improvement when our joblessness is actually worsening. If you think the way the U.S. government represents joblessness figures is purposely confusing, raise your hands.

Let’s break it down….

But if unemployed people dropped from 10.2 to 7.5% during that same time even though the percent of people working did not increase, what happened to this 2.7%, or 5.5 million people?

Well, states smartly put 4.7 million people on disability. States pay for welfare but the federal government pays for disability. So, at a cost of $2,500 per worker, states have geared up to pay private companies to dubiously transfer people that would have been on welfare to federal disability. Historically, 99% of people added to disability never leave it. The remaining unemployed have been absorbed by the welfare system.

Before anyone stands up to bash the current administration for obscuring how bad our economy really is, kindly settle your tushes back down and listen. This disability scheme has certainly been used as a buffer for the economic implosion, but it is not new to this administration. Since China opened its doors in 1979, our disability ranks have swelled from 2.3% of our workforce to 6.1%.