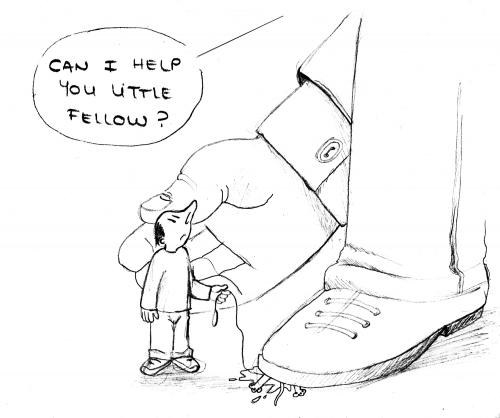 Switzerland is small and the United States is relatively big, India much larger. Switzerland is about the size of Vermont and New Hampshire combined with the population of Virginia, 8 million people. Comparing that country with countries the size of the United States at 310 million or India at 1.1 billion people, one might conclude that some means of governance would have to be different simply due to size.

Yet all three countries send their young people to possibly die in their militaries. All three have healthcare and trade issues. All three tax their citizens. All three have currencies to maintain. Why is it that only one of the three allows all its citizens to decide if their government has made the proper choice for their country?

The issue is whether India, the United States and Switzerland provide fair representation of their citizens’ views in their political choices. If the citizens of the United States chose to indebt their grandchildren so that they could live a better life, then so be it. If they chose to place 25 percent of their population in either low paying jobs or on unemployment so that the rest could enjoy low priced goods from China, then so be it. If they chose to force millions of home owners to give up their homes so that a few bankers could gamble with their value to make trillions in credit default swaps, then so be it.

However, given the choice to vote on the wisdom of a few politicians’ choices regarding what in hind sight were self evidently selfish choices that ignored the best interests of the majority of Americans, the likelihood that the United States would be in the predicament we are in if we had Switzerland’s political protections is pretty small.

The question I have raised is one of fair representation. The United States Congress has bowed to political pressure and has opted to support one tiny faction of wealthy people over the interests of the vast majority and over our country’s very future. A review of which bills get introduced, which bills are put to vote, and which bills get passed makes if painfully clear to any who study the evidence that our representation is flawed. U.S. representative corruption is not unique in history or in contemporary governance. It certainly is evident in India as well. It is, however, unacceptable to any free nation and opposes the will of the U.S. Constitution.

America’s system of choosing 535 people to represent the wishes of 310 million is broken. Congress’s voting record resembles the wishes of perhaps the wealthiest 60 million and disregards the welfare of the remaining 250 million. No country’s governance can last the test of time that chooses this path. It leads to plutocracy and eventually military dictatorship as the only means to hold back the fairness that democracy promises, and neither of these types of governments has proven stable in history.

The intent of our founders was that a balance of power between the wealthy and the commoner be shared so that neither could take from the other without permission. It was their intent that all could choose together to grow the nation in fairness and peace and that all would share the burden of that responsibility. Yet America is ignoring their wisdom and a rift is growing.

I am not advocating the rift that is building in America, merely observing it and voicing the crisis that is approaching from a distance. If we choose to ignore the winds of discontent and continue our selfish governance, this discontent will generationally grow into civic unrest and will eventually force a contest of state power over its people. I expect that before this occurs, the safety valve of our Bill of Rights will allow the freedom of assembly, the freedom of speech, the freedom of the press and right to vote to overthrow the will of 535 who are not listening to the will of the people.