Home Ownership’s Role in the Downfall and Rebirth of Detroit 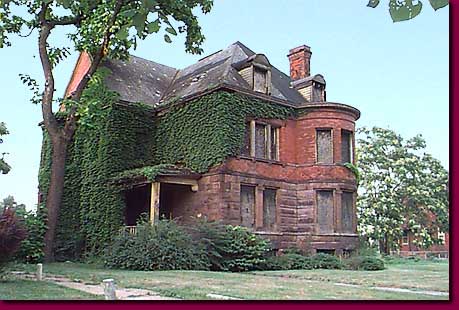 Mr. Dan Gilbert purchased a downtown skyscraper that should have gone for $200 a foot for $5 a foot. He sees a gold mine that just hasn’t yet struck gold and is willing to invest in Detroit. Detroit will either continue to wither until it is forced to be broken apart, dispersing the gold nuggets to those that would cart them off, or it will recover, saving the city’s heritage for those that have remained and for those that wish to come back. My bet is on the latter, that Detroit is on the verge of recovery if concrete steps will be taken, for Detroit is critical to the success of Michigan and for the United States.

Detroit is ripe for those that would brave the elements, for once cured of its ills, the 88,000 acres that are the city of Detroit will eventually be worth a mega-fortune. The questions surrounding this fortune include, who will be the beneficiaries of the windfall, and how quickly will the fortunes of Detroit turn around, and will Detroit’s recovery create a livable city for those citizens that have remained in the city and that will be required to do heavy lifting.

Would it be wrong to expect that the current residents of Detroit should have a stake in the financial rewards of creating a more vibrant, crime reduced city as well as a better quality of life? At the end of the Civil War, black leaders asked for 40 acres and a mule, the tools of a financial start at that time. A home and a job are today’s equivalent.

Mr. Orr has the responsibility to create a path forward for the city that includes its citizens’ ability to prosper in their efforts to collaborate with those that will come forward to inject new life and new prosperity. A vision that is inclusive of the citizens who remain in Detroit is required.

Home ownership is an institutional privilege of capitalism. The perspective owner must have good credit, must have secured a down payment, must not have accumulated debt obligations, must have a history and prospect of adequate, must apply during reasonable economic times, must be in a location that is not wrought with undue competition for homes that drive their cost beyond reach, and in a location in which the lender feels adequately assured that the home will maintain its value.

Home ownership is a thread that weaves through the story of the African American. So few could own property before the end of the Civil War. So few could afford it afterward.

Most ex slaves were forced to endure plantation housing after the war. The capitalist system requires capital to start a free life. The minimal capital of the era was enough farmland to sustain a family. Yet without a means to acquire it, generations of ex-slaves would resort to share-cropping.

Lincoln’s Homestead Act made land available to hundreds of thousands of immigrants but a mere 20,000 blacks could afford to take advantage of 160 acres of free land offered. Most could not afford the travel and survival while planting the first year, nor could they afford the requirement that they build a house on the land. Yet, the Homestead Act was the impetus for Europe’s flood to the promise of America. Millions of descendants of Europeans in the generations that followed would benefit from the millions of acres freely given.

The 20 year “Long Depression” of 1873 was caused by a bank binge, housing bubble in Europe that sent thousands of immigrants scurrying for jobs in America’s cities, many of whom ended up in the slums of Detroit, competing for housing with newly arrived black migrants during the 1910s.

Housing would be discriminatorily kept from blacks in the 1920s, as restricted covenants supported by the National Association of Real Estate Boards became commonplace. Throughout the 1920s until the Supreme Court ruled them unenforceable in 1948, covenants would segregate neighborhoods.

By the late 1920s, banks created another housing bubble that burst at the start of the Great Depression. Out of the Depression came FHA housing insurance that made buying a home easier for millions of whites, but that continued to discriminate against blacks through a federally accepted practice of redlining. Through redlining, even though they had equal qualifications as whites, many more blacks were denied FHA backing and therefore did not “qualify” for homes.

This social engineered, institutionally racist, discrimination had a major impact on black communities, for housing was the major way middle class America grew and passed on wealth to heirs. Generations used their accumulated wealth to advance their families through such means as home equity loans to pay for college educations. Yet, this necessity of the industrial era, this replacement of 160 acres and a mule, was denied blacks.

The combination of FHA financing, a post WWII boom and the introduction of the Federal Highway system helped fill the suburbs. Thousands of whites exited Detroit. Restrictive covenants and Redlining kept blacks back in the city with 20% lower home ownership. At the time, 88% of blacks supported integrating neighborhoods and only 12% of whites found integration acceptable.

The remnants of restrictive covenants that were socially enforced and redlining that was institutionally supported continued through the 1970s, even after Congress passed Title VIII of the Civil Rights Act for fair housing in 1968. The efforts of grass roots organizations led to the Home Mortgage Disclosure Act of 1975 and finally to the Community Reinvestment Act in 1977.

The idea behind the CRA was to attempt to redress a century of housing discrimination that had preceded it through what would amount to racial balancing of loans going forward. Yet America’s bankers had already shown that they were capable of creating housing bubbles back in 1873 and 1929. Given the need to fund China’s gold rush that had just begun in 1979, it was only a matter of time for bankers’ greed to use the principles of the CRA as a means to create yet another housing bubble.

In Detroit, the housing bubble was a vehicle for middle class blacks to leave the city when loose credit and anti-discrimination housing laws made home ownership more possible. Yet, as the bubble burst, foreclosure hit blacks twice as hard as whites, continuing our nation’s housing saga. While banks used foreclosures to recoup losses in most parts the country, many banks, faced with plummeting house prices in Detroit, left them abandoned rather than pay the taxes, adding to the blight that earlier banking policies had exacerbated.

Abandoned housing can be assets for Detroit going forward. They can be a component of a more stable, safer Detroit. If allowed to continue to ferment, they may also be yet another stitch in the continuing thread of discriminatory housing as part of institutional racism that fed Detroit’s downfall.