Does Cap and Trade Signal China’s Rise as the World’s New Super Power? 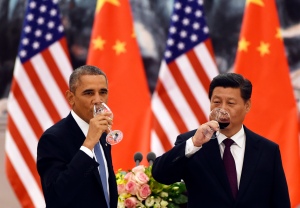 For the past 40 years, China’s leadership has systematically implemented a 50-year strategy to overtake America as the world’s leading economic and political power.  In the history of the world, no country has ever accomplished this feat without a major war.  Yet China brilliantly planned to dethrone America without bloodshed by disabling America’s ability to conduct war well before our politicians would ever think to drum up a war frenzy.

A critical assumption of China’s strategy was that America’s international investors and financial institutions would scurry to help her grow, given the chance. America’s elites did not disappoint China’s leadership.  With promises of riches, America’s capital investors feverishly rushed in to help China achieve most of her goals in just four short decades.

While both China’s and America’s leaders wanted China’s economy to grow dramatically, the motivations of each country’s leaders were strikingly different.  China’s leadership grew rich while building a massive economic and technological infrastructure to support her people’s future.  On the other hand, America’s leadership grew rich by stripping our citizens’ future to fuel their own personal wealth.  China simply had to offer a gold rush to America’s investors, and they in return blindly transferred America’s wealth for China to overtake the United States.

Knowing that the world could only extract a finite amount of debt from western economies to support China’s growth and that the cash flow from West to East would ultimately create an unsustainable debt bubble, China rapidly overbuilt manufacturing capacity in anticipation of slowing of investments from America and others. Now, China sits atop a mountain of physical assets while the rest of the developed world sits atop a junk pile of debt.

The West is now in the precarious position of either propping up China, or of sending the world into depression.  If the World’s debt bubble bursts, much of America’s investors’ wealth will evaporate. China will also default on her debt, but tens of thousands of new factories will remain in China.  China, will recover from an unprecedented depression with infrastructure, skills, trade relations, and gold to restart a new world economy.

Given America’s amassed debt and gutted manufacturing capacity over the past 40 years, we cannot withstand a long, deep depression. Our central bank has no alternative but to assist China in keeping the bubble afloat.  But, our citizenry must adopt a long term strategy to reverse what has left us in this dire predicament.

With a massive shift in power that the world unwittingly gave China as a backdrop to the issue of global warming, China’s President, Xi Jinping, has now come to America offering his support for pollution cap and trade.  Until now, neither America nor China has been willing to sacrifice economic growth to reduce carbon emissions.  Why then is China now willing to offer pollution cap and trade?  At this stage in the progress of her 50-year strategy, China can now manipulate cap and trade to further her bloodless revolution.

Americans believe that a small consolation of our slowed economy from tens of thousands of factories being transferred from America to China is that pollution was also transferred from America to China.  Our air and water is cleaner as a result.  Yet, in a cap and trade environment, this transfer of pollution now gives China “pollution assets” to either expand her own economy or to sell back to America.   Cap and trade would force America to either trade existing American pollution for new pollution or to buy pollution from countries like China.

America’s dollar is so diminished, our central banking tools so depleted, our industries so gutted, our trade relations so reduced, our nation so indebted, that we are almost toothless to counter China’s 50-year strategy.  If we do not coalesce around a focused strategy to counter China, our Constitutional Republic could be endangered.  Xi Jinping’s visit should be a wake-up call.  America must not let Cap and Trade have a place in our economy until our economy, national security, and future is placed first in the hearts and minds of America’s investors and politicians.