Either Trump or Sanders Will Win the Presidency 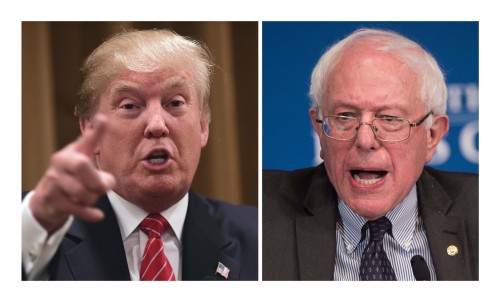 For decades, Americans have grown increasingly frustrated by what seems either as incompetence or as ideological stubbornness by both Presidents and Congress. After years of being ignored about lost jobs and lower pay, voter anger has peaked.  Americans have finally risen up to elect either Trump or Sanders as President.

We see both men as incorruptible supporters of the 99%.   Both have stood against international trade deals to bring back good paying jobs to America. Both have touted severe prescriptions to help America. Trump supports reversing illegal immigration to open more jobs for Americans.   He’s offered a deep tax cut for billionaires to avoid a political war within the GOP, although to no avail.  Sanders instead has declared a political revolution, vowing to fix America’s corrupt voting process, and to institute major transfers of wealth from America’s billionaires to the underclasses.

Shocked by America’s uprising, establishment politicians of both the Republican and Democrat parties have declared all out war to defeat Trump and Sanders. Party leaders have touted multiple reasons why they want to destroy them. But to be clear, the unspoken, REAL reason for such a blatant power grab is that America’s billionaires want their politicians to keep international trade deals in place, and to not give an inch of political power back to the middle class.

America’s billionaires profited trillions of dollars from military expansion that eased the transfer of America’s factories to other countries, and from trade deals that allowed bringing cheap goods back into the United States, both displacing American workers. Even if they may have their own candidate preferences, America’s billionaires will support any politician that continues to support their “free trade” money system.  Some GOP leaders have even blatantly stated that they will support Clinton over Trump, exposing billionaire objectives.

GOP and Democrat politicians will continue supporting their billionaire campaign contributors in order to maintain their jobs, parties, power and wealth.  They, therefore, will do everything they must to defeat Trump and Sanders.

2016 has been a naked display of anti-democratic thuggery by party establishments to stop voter insurrection.  But Trump and Sanders are fighting back, David against Goliath.  Trump is beating the drums of democracy against his own GOP as he continues to win a plurality of delegates.  Bernie Sanders is accusing Hillary of being paid off by her billionaires, and continues his winning streak in the traditional Democrat states, proving him to be the clear, best choice for his party.  As both parties and insurgents push forward, this revolution may not end without violent political upheaval.

Most Americans know that either Trump or Sanders must be elected to stop decades of billionaire abusive profiteering and trampling of the middle class.  So a coming voter backlash is building to a fever pitch.  I personally believe Trump’s policies are best to move America forward.  But if either he or Bernie is defeated for their party’s nomination, they must still go forward as independents to represent the will of the American people. Then, America will make its last stand as the House of Representatives, a body meant to represent the people, votes in the new President.  The Constitution will hold firm.