How Small Can Detroit be and Still Survive? 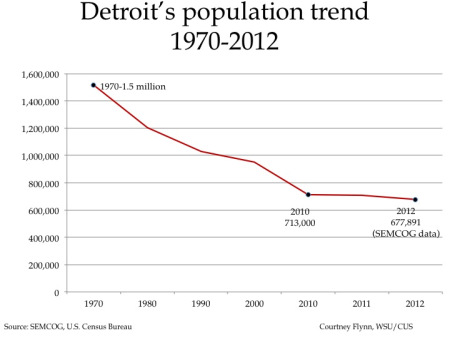 In Detroit’s emergency phase and subsequent turn around phase, Detroit must stabilize its population to minimum sustainable level. What is the Blue Sky Turn Around Survival Number To Stop Detroit’s Bleeding? Has anyone asked?

Current projections show Detroit’s population sliding a bit more. The white population has bottomed out. Blacks left during the housing boom but access to housing credit has dried up. Millennials are coming back to the city as are a small percentage of immigrants. Yet violent crime is increasing and is prevalent in all parts of the city, forcing residents to continue to look elsewhere to live.

The emergency manager must stabilize the city’s exposure to continued deficits. He must project a revenue trend in making his decisions regarding budget cuts. Given current population and city revenue projections, he is likely to make draconian cuts. What growth must Detroit realistically project for the next three years to satisfy the emergency manager that more draconian measures needn’t be taken for Detroit’s survival?

Will 50,000 net new jobs, 25,000 less people on public assistance, 35,000 more home property taxes, 3,000 new businesses and 50 new small factories and plants strategically dotting the Detroit landscape over three years be enough to reverse the city’s bleeding? What would be a satisfactory number without regard to whether it could realistically be achieved?

Whatever the number, shouldn’t Detroit be resetting its paradigm to achieve that goal and more? And if that flow of new business could be achieved, then the city must ask itself, “Are we prepared to do what must be done to support that level of new business?” Could the city’s land use and livability plans, city administrators and regulators, developers and contractors support the minimum growth that would satisfy the emergency manager, if that level of growth could be achieved over 3 years?

What would the turn around goal need to be to avoid a destructive sell-off of vital city resources that will occur to satisfy emergency restructuring, absent any growth to stabilize the city? Whatever that number is, set the target 25% higher. Now, how can it be achieved?