After 1967, Detroit Would be Left Alone To Fend Off the Death Knell of Racism 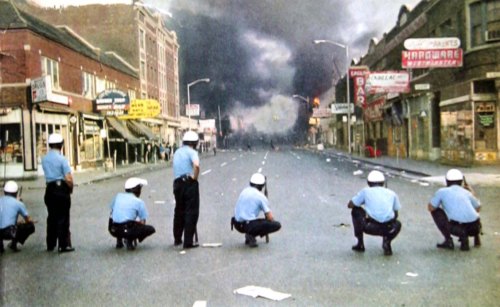 Detroit had 24 years to correct its glaring racial divide between riots. The Detroit Riot of 1967 began as a reaction to police brutality, reminiscent of the Los Angeles riots that would occur 24 years after Detroit’s 1967 riot. In Los Angeles, Rodney King would be brutally arrested by police officers who would subsequently be acquitted in Los Angeles courts, signaling a continuing institutional racism in America.

In 1967 Detroit, instead of it escalating from conflict between white and black youth as had occurred in 1943, this time the riot started when police broke up a party for a returning Viet Nam vet. What should have been a routine call turned into a bloody five day riot littered with gunfire.

The response of 1967 rioters was more militant with outrage than the 1943 riot. Instead of blacks just targeting white stores as in 1943, this time they destroyed beloved black owned businesses of the city as well. Instead of white mobs roaming into black neighborhoods and beating blacks, this time, blacks stood atop buildings and sniped with rifles at authorities that attempted to put out fires and to respond to scenes with EMS vehicles. 467 were injured in the riots. Instead of mostly blacks injured as in 1943, this time 167 of the injured were police officers, 83 were fire fighters, 17 were National Guard, 16 were federal police officers, and 3 were U.S. Army soldiers.

The escalation of violence seemed out of place to some for Detroit seemed a city racially mending, at least on the surface. Detroit had begun to deal with the institutional racism that sparked the last riot in 9143. The city had begun to reform the city’s police department. Blacks now had political representation and agency leaders. Black incomes had been steadily rising and a black middle class was emerging. The Mayor of Detroit had participated in Lyndon Johnson’s Great Society city revival efforts and had brought millions back to invest in Detroit’s inner city.

Yet, the underlying causes of the 1967 riot remained the same as that in 1943, an unanswered call for justice. Police brutality, housing, and employment discrimination continued. Educational discrimination and segregation intensified. Frustrations had escalated over years of neglect. By 1967, militancy had replaced patience in the fight against the slow pace of reform in Detroit.

Blacks wanted what most Americans want, decent jobs and neighborhoods, and to be considered by the content of character and not the color of skin, as Dr. King had urged for the first time in his speech in Detroit. Yet, while blatant racism enforced by lynching was finally fading, violent racism had mutated into more sterile yet just as potent racism that terrorized the psyche of African Americans.

Institutional racism still infected Detroit society. Detroit hospital wards for instance were still segregated and mortality rates were higher in the black wards than in the white. Black schools were overcrowded and under funded. And FHA insurance ensured that whites could leave the city while FHA continued to trap blacks within through redlining.

New suburbs, made possible from FHA insurance, were free of the environmental racism of industrial toxins and blight that remained in black communities. And civic racism abounded in Detroit. Mo-town had a culture centered in the slums of Black Bottom and Paradise Valley, communities with a history as old as the foundations of Detroit. Yet in the redevelopment of the motor city as the ideal community the automobile world, highways were built through the heart of these black communities, carving up their identities. Highways became cement corrals separating black slums from the sprawling suburbs escaping Detroit’s racial divide.

Detroit’s whites ran to the suburbs away from the city’s oppressive past, just as European superiority ran from its past across America. In the void, Detroit’s blacks became increasingly frustrated from what was left of the city.

Detroit’s industrial employment, which had bubbled higher and higher for two decades on the backs of two world wars, was absolutely destined to decline. Its myopia of industry centered on automobiles certainly had to dilute. Detroit would have to eventually live through an economic transformation from war industry and auto manufacturing to a more sustainable mixed economy. Yet, as whites escaped to the metro area surrounding Detroit, they brought that inevitable transformation with them, leaving Detroit to fend for itself.

Detroit was left with an increasingly distilled, lower socioeconomic class that would be left on the sidelines of economic reform. And as business became increasingly global, Detroit would become the city with the highest African American population, the highest unemployment, and the highest crime rate in America. As city officials searched for a way to turn around the Detroit, the path toward economic transformation would elude them because the city could not heal its racial divide.

Detroit can transform economically. It is a city with vitally important resources that can support an industrial mecca of the future. Yet that Promised Land will never return until factors of race are healed. Why must a community that has been oppressed since Detroit first became a city be the ones to initiate the healing? Well, for the most part, they are all that are left in the city. If it will be done at all, it must be the city that rises up now to do it.